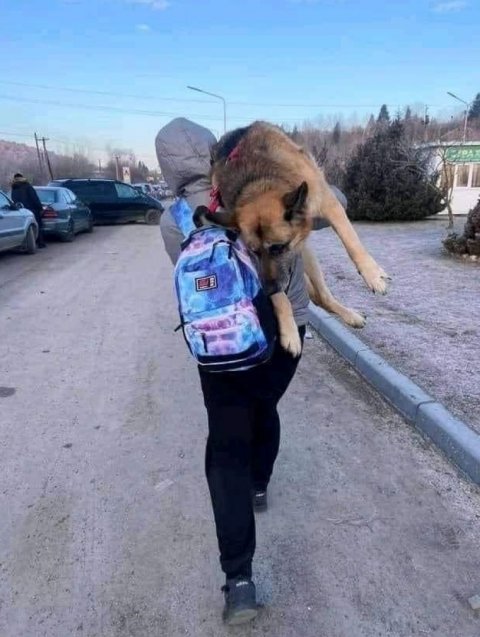 The horrible war in Ukraine is turning into a disaster at an unprecedented scale. The following exodus of refugees has already reached the Netherlands. Throughout the country, reception centres are being prepared to accommodate the refugees.

The last few days showed that these reception centres are gradually being used. However, it has become clear that the volunteers at the reception centres are taken aback by refugees arriving with their pet animals. This was not taken into account when preparing, building and accommodating the centres, and one does not know what to do. The general policy of the organisation is: animals are not allowed.

Do we actually realise what it means when we inform refugees, who have been on the road for days, sometimes literally carrying their animals on their shoulders, telling them: “We have a place for you to sleep, but unfortunately your pet animal is not allowed in. It will be fetched and taken to another shelter. You will have to say goodbye, but you will be reunited soon”.

We are talking about people, who were forced to leave everything behind, having to say farewell to everybody and everything, and merely taking their most treasured possessions with them: their family and their pets.

Various studies of people fleeing after a (natural) disaster, showed the importance of the bond between man and animal. Taking their pet with them is no different from taking a member of their family with them. For many, the stress and anxiety caused by the separation from a pet is the same as being separated from a family member. Pets provide company, feelings of safety, security, and warmth.

The loss of a pet may jeopardise recovery and resilience from a disaster. It was shown that a forced separation from a companion animal, significantly contributes to acute trauma, risking increased long term PTSS. Children especially can become severely traumatised by the loss of their pet.

Clearly, we must try to avoid further increase in suffering, seeing to it that people and their animals are accommodated together. And this possibility does exist. In the past few weeks, animal welfare organisations in the Netherlands have joined hands, having realised a complete safety net for Ukrainian refugees with their family and pets.

Are there already pets at the reception centre that falls under your responsibility? Please contact us as soon as possible, to help people and their pets in a responsible way, in order to prevent further suffering together.

1. Support at the reception centres for people and their pets.

2. Advising caregivers and refugees about the care of the pets.